From Single Sign-On Attacks
Jump to navigation Jump to search

There are several options to perform Signature Wrapping depending on the implementation of the verification logic:

The attacker needs access to a valid token. For this attack to work, the attacker modifies the contents of the token by injecting malicious data without invalidating the signature.

The attacked Single Sign-On components are marked in red colour.

The attack targets the discrepancy in the program logic of SSO Verificator and SSO Processor. The latter should extract and forward only exactly the data verified by the former to Authorization & Access Management (AAM).

The attacker manipulates his token by injecting malicious contents, for example, the Identity (I) of other users. As a result, the attacker can log into arbitrary user accounts and gain unauthorized access to their data. 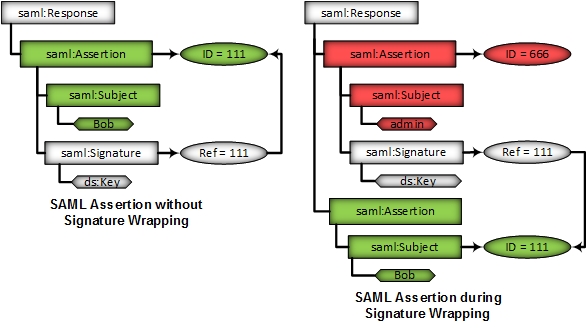 The authentication token is signed for a user Bob. Via XSW the attacker can inject a second Assertion containing another identity (e.g. admin). The verification logic will verify the Assertion pointed by the Ref, which is valid. The business logic (SSO Processor) will process the injected (malicious) Assertion. The SSO Verificator will verify the signature based on the contents of the original Assertion, which is selected by ID. However, if the SSO Processor’s program logic automatically processes the first Assertion found within the token, an attacker can bypass the integrity protection and enforce the processing of unverified data on the SaaS-CP. 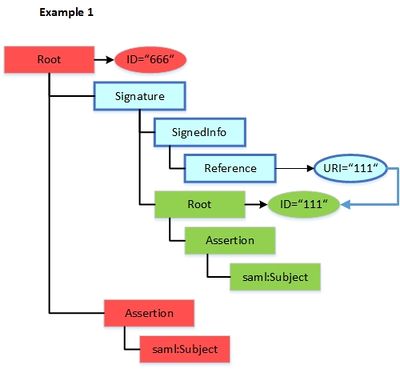 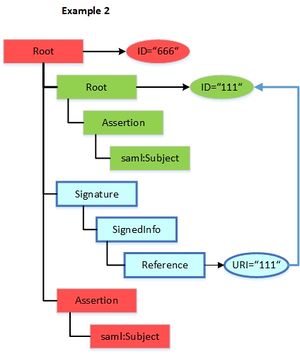 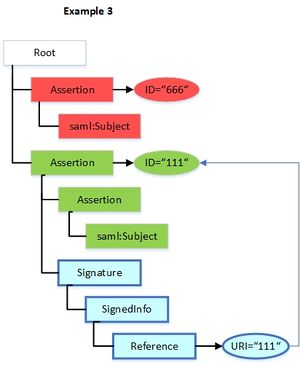 The countermeasures depend on the attack subtype in use. The general approach would be to enhance the interface between the signature verification function and the business logic. In this approach, the signature verification returns some sort of position description of the signed data, next to a Boolean value. The business logic may then decide if the data about to be processed has been signed or not.